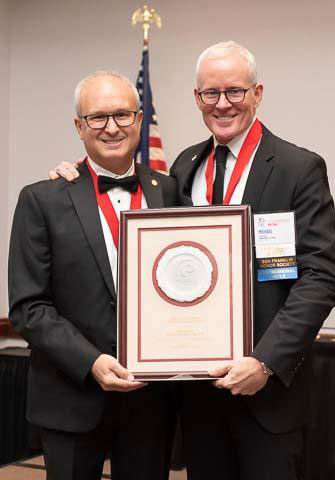 Established in 1950, the Lewis Award recognizes business leaders who have made major, long-term contributions to the graphic arts industry and have been a significant force in shaping the business of printed communications. The award was presented on November 9 at the Ben Franklin Honor Society Award Dinner during the Fall Administrative Meeting of Printing Industries of America in Grapevine, Texas. The award was presented to Ekstein by Canadian-born Michael Makin, who has been President and CEO of the Printing Industries of America since August 1, 2002. "Being recognized with the lifetime achievement award from the Printing Industries of America is an enormous honour," said Ekstein. "It was particularly meaningful to receive it as a proud Canadian from my colleague Michael, another proud Canadian. It's been a real privilege for me to serve the North American graphic arts industry in various capacities over the years."

Ekstein has served PIA for more than a decade, initially as a director, advancing to the officers' ranks in 2011, and ultimately to Chairman of the Board in 2013. Additionally, he has served on countless committees and task forces. He was the Education Committee Chairman from 2009 to 2011, and is currently a PIA Finance Committee member and serves as a judge for the Premier Print Awards.

In 2016, Ekstein was named PrintAction's Community Leader of the Year as part of the annual Canadian Printing Awards. Prior to that, he was named one of PrintAction's Top 20 Most Influential Printers in 2010.